Integrating TINYpulse Engage with your company's existing Azure Active Directory will simplify user management through automation. No longer will you have to manually add users one by one, or send an import file to the TINYpulse Customer Success Team. Complete the Active Directory integration one time and users will sync automatically into TINYpulse.

To complete this integration, you'll need these three things:

( ! ) If you are missing any one of these three things, please contact your in-house technical team for assistance before proceeding.

Whether you are new to TINYpulse or you have been pulsing for years, the Azure Active Directory integration will significantly decrease your time spent housekeeping employees in TINYpulse.

1. Log in to TINYpulse and navigate to the Integrations page under the Settings tab. 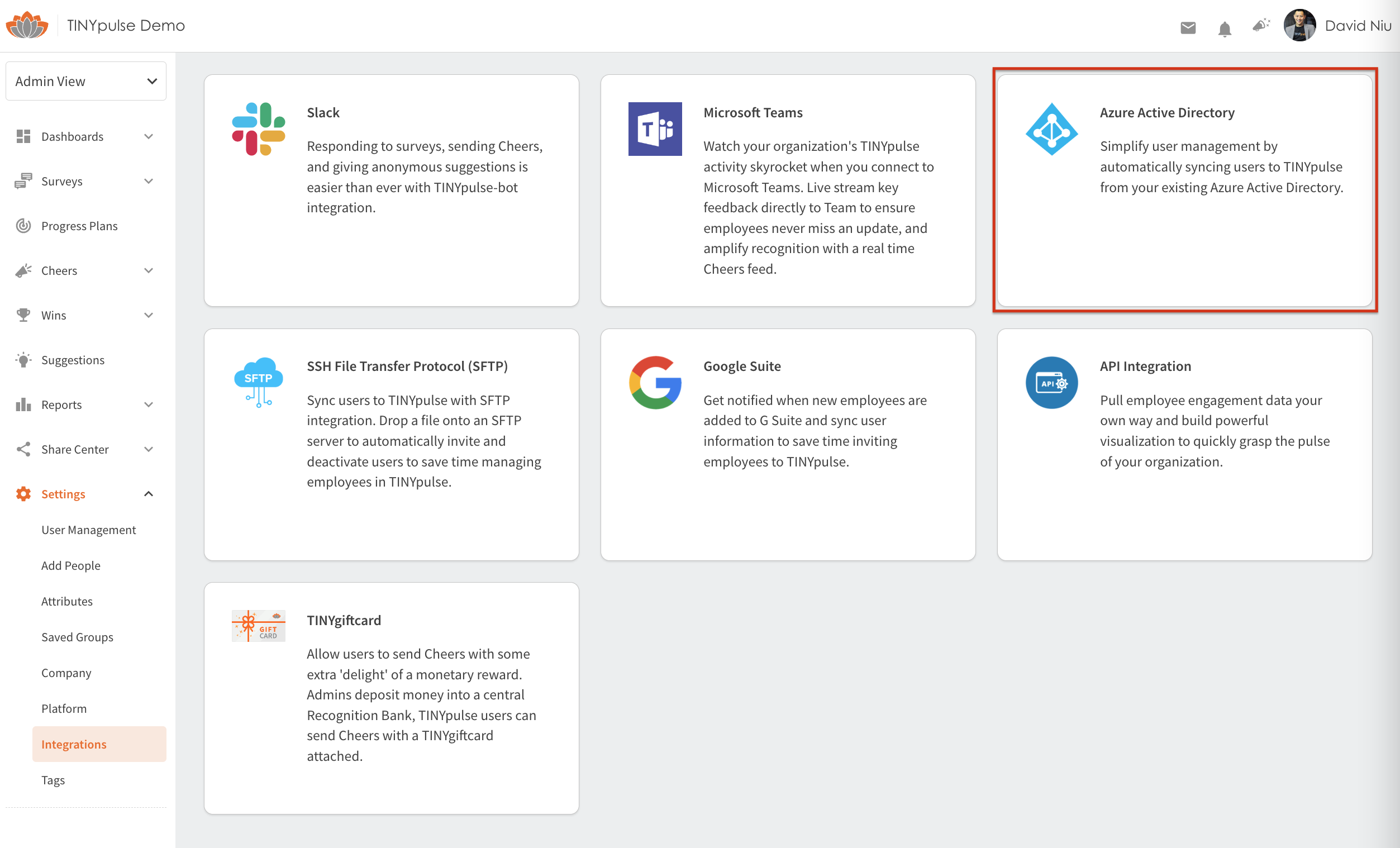 4. Enter your Active Directory login credentials and Sign In.

5. You will be asked to grant permission to TINYpulse to the Azure AD instance. Read the message and Accept to return back to TINYpulse.

6. Now that you are integrated, you still have to import the Azure AD groups to TINYpulse. Select the group(s) from the dropdown list that you would like to sync and click Add when you are done. 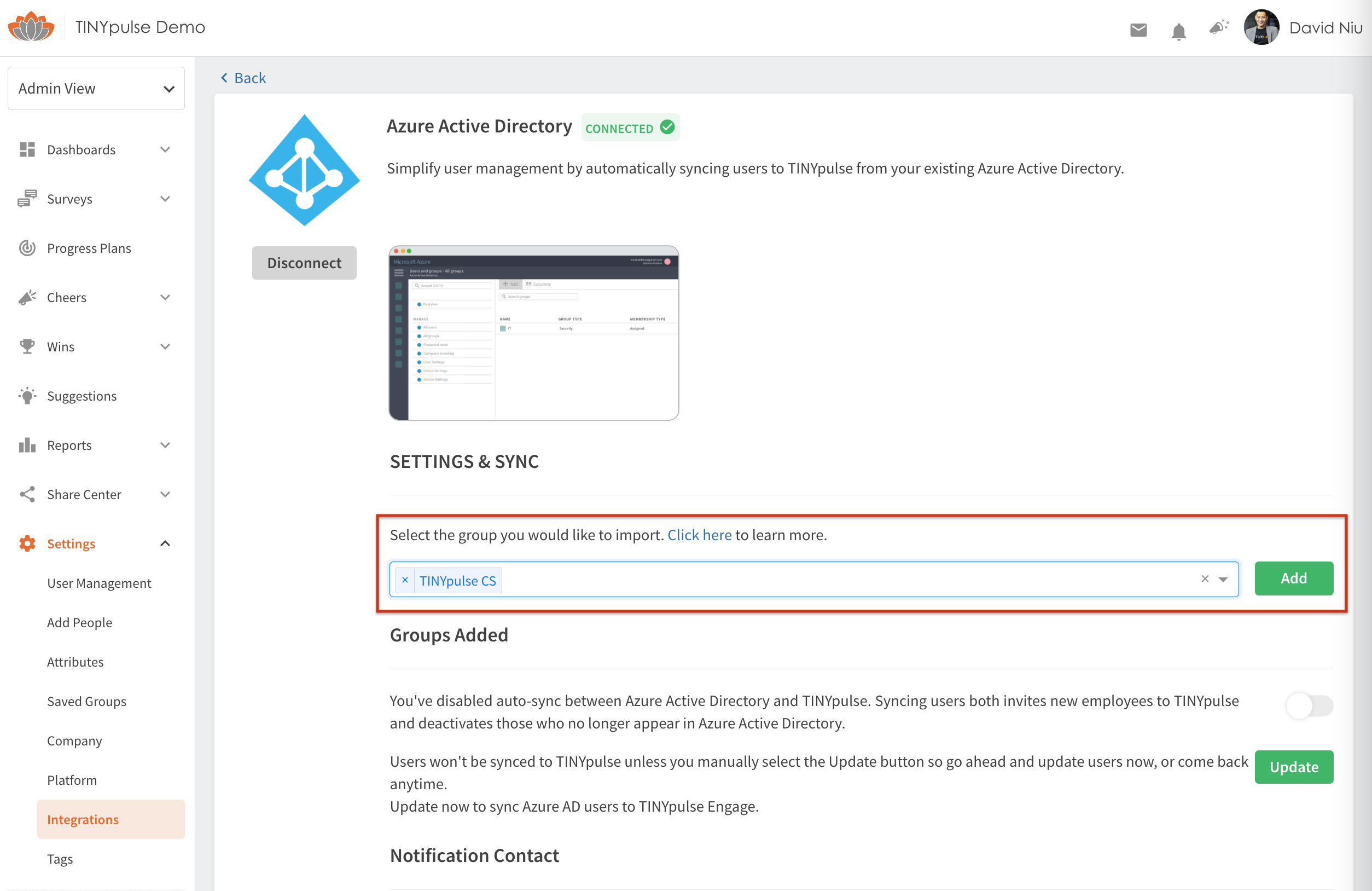 If you are new to TINYpulse and have not invited any users yet, but your account has launched, clicking Add will send invitation emails to new users immediately. Once they get the email, employees can set their TINYpulse password and will have full access to respond to their Engage survey, send Cheers, give anonymous suggestions, and more.

If you have been pulsing for a while and are just looking to simplify user management going forward, existing TINYpulse users will be unaffected by the sync. They will not get any sort of notification from TINYpulse. However, if there are any TINYpulse users in your account that do not appear in Azure AD, they will be deactivated immediately. Azure AD serves as the one source of truth so please make sure that all of your TINYpulse users belong to one of the Azure AD groups you have synced.

When you select Azure AD groups to sync to TINYpulse, they will import instantly and groups will be auto-synced once per day after that at Midnight UTC. (Not sure where you land by comparison? The World Clock can help!)

The default setting is to sync selected Azure AD groups automatically. You can opt for manual updates by going to the Apps section and switching automatic updates off. When you switch to manual update mode, an Update button will appear so you can manually sync users between Azure AD and TINYpulse on demand.

For further automation of TINYpulse user management, you can enable Segment syncs. This will automatically create new TINYpulse Segments based on your existing Azure Active Directory group structure.

Once you have turned on Segment syncs, feel free to update the Segment names or change the mapping to another existing Segment.

( ! ) Segments have generally been replaced by Primary Attributes for better qualitative and quantitative reporting. If you are new to TINYpulse, we recommend leaving the Segments Sync feature off for your Azure AD integration.

Note: The fields listed below are what will be synced by default. This is based on what the API returns. TINYpulse has no control over what is returned to us by the API.

Will my existing users get overwritten if I import them from Azure AD?
If the employee's email address from Azure AD matches the one in TINYpulse then they will not be overwritten. They will still keep their Cheers, Pulse Streaks, and Attributes, the only difference is their name will update if there is a mismatch between Azure AD and TINYpulse. Azure AD is considered the source so the sync will update the name in TINYpulse to match.

Can I use Onboard for new hires with the Azure AD integration?
At this time, all users synced from Azure AD will get Engage surveys by default; new hires will not get Onboard Surveys. Please contact our Support team by clicking this link for assistance moving newly hired employees from Engage to Onboard.

What happens if I deactivate a user in TINYpulse but they still belong to the Azure AD group?
They will get reactivated during the next sync. See above.

What happens when a user gets removed from the Azure AD group?
They will be deactivated in TINYpulse and will not count against your per-seat subscription size.

Create a group specifically for TINYpulse in Azure Active Directory

We recommend creating one group in Azure Active Directory specifically for TINYpulse, especially if you have a large organization and not everyone needs access. Use this group to prevent syncing employees who actually do not need TINYpulse and will count against your per-seat subscription size. Instead of inviting and deactivating employees directly in TINYpulse, you can simply add or remove them from the AD group and they will be synced for you.

See the Azure AD documentation for Managing Groups for detailed instructions on how to create a new Azure AD group for your TINYpulse application.